African Women: Peacebuilding for the Future

Posted on October 8, 2014 by Center for Global Awareness 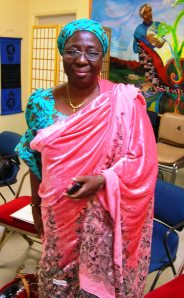 What do the African nations of Nigeria, Madagascar, Nigeria, Uganda, Senegal, Burkina Faso, Togo, and Côte d’Ivoire (Ivory Coast) have in common?

The answer is that they all have strong women leaders.

I know this as a fact since I met nine of them on September 19, at a program sponsored by our local Albuquerque Center for Peace and Justice and the International Visitor Leadership Program. Sponsored by the U.S. government, this group of interesting, committed, and energetic women was learning as much as possible about peacebuilding on a whirlwind tour of the U.S. with the goal of implementing their new-found ideas in their respective African countries and communities. All represented different NGOs (non-governmental organizations), and included the Inter-Faith Peace Foundation in Nigeria, the large African Union, Amnesty International, and the United Nations.

Since so many ideas were brought up in the discussion and this is a short blog, I will first highlight comments from a few individual women representing their respective nations and then summarize a general discussion topic that seemed to strike a chord among the African women and the audience.

Senegal. The representative said that along with working on women’s and children’s rights, she helps negotiate with a rebel group located in Casamance, which is separated from the rest of Senegal by the country of Gambia. The area is home to numerous ethnic groups, including many Christians, while northern areas are dominated by three, largely Muslim communities. The rebels want independence from Senegal and have engaged in low-level conflict since 1982. She is eager for her children to finally be able to experience peace in her country. 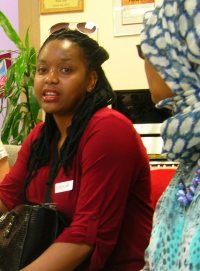 Madagascar. The representative proudly claimed that she was running for president of the country in another 10 years. She felt that one of the problems in her country was that foreign industries do not benefit the community in some way. She was particularly incensed about the “brain drain” that was occurring; well-educated people immigrate to the U.S. and France. This is an interesting side of the immigration debate worldwide because poor countries lose many of their most educated and their potential leaders to wealthy countries after making a sizable investment in their education.

Burkino Faso. The representative stated that she was infuriated by the fact that their corrupt president came to power in a coup d’état in 1987, and has remained in power since then. “Too long,” she remarked. Also, she was alarmed at what she called the “economic Chinese Invasion,” meaning that China was economically taking over many mining operations, buying up farmland, building infrastructure, and acting as the French once did in colonizing their country.

Nigeria. The representative stated that equality of women is part of the constitution in her country, but the actual implementation of this law is rather sporadic. Some of the traditions and customs that are entrenched in her country can hamper the treatment of women as equal citizens.

One of the discussions that I thought was interesting was brought up by one of the American hosts. She stated that as an atheist she thought that religion was one of the primary contributors to the relegation of women to second class citizen status in many countries and regions of Africa. If, she argued, religion was eliminated or diminished women could more easily gain equal status. Well, that brought out some interesting thoughts from our African guests! Everyone had something to say! 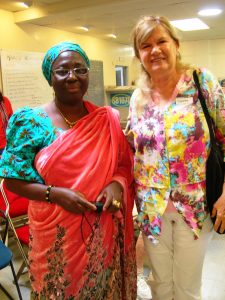 First, as my Nigerian friend sitting next to me pointed out, most Africans are deeply religious people. Most identify with some type of religion, be it Christianity, Islam, or one of the many tribal religions that continue. The thought of eliminating religion was shocking to most of the nine African women.

Several women made some insightful responses to the religion topic; I will summarize. Some made a careful distinction between religious principles and customs and traditions. Many of the customs and traditions that stigmatize women may claim that they are part of a religious creed but are actually grounded in patriarchal attitudes that are not part of the religion. For example, female genital mutilation is a tradition primarily practiced among Muslims in Africa, but also practiced by Christians and tribal religions. There is no mention of FGM in the Qu’ran or the Bible, yet the tradition is linked to religion by practitioners and continues despite refutation by religious officials. Therefore, many interpret patriarchal attitudes as part of religion, but this is not correct.

To some of the women in the group religion was more than just the carrier of traditions and customs; it provides a social network for women to actively participate in and express their spiritual beliefs with others. They thought that the diminishment of religion in the United States and the West was alarming to them, and was a reason that so much emphasis was placed on consumerism with not enough emphasis on family life and community.

My friend seated next to me, who lives in Kano in northern Nigeria, commented that recent events – the seizure of 276 school girls in April 2014 by the extremist Islamic group Boko Haram near her hometown – have led to more questioning of religion. She stated that Boko Haram had previously made many claims about the suppression of women in the name of religion, which often went unchallenged. She said the kidnapping of the girls has led to more people questioning the religious dictates of those claiming to be religious leaders. She welcomed this development.

It was a real privilege for me to spend just a few hours with these remarkable women. Although they claimed that they had traveled to the U.S. to learn from us, I found that there was much to learn from them in return.