Respecting Mother Earth: A Plea from the Teyuna People, Part 2

Posted on October 9, 2018 by Center for Global Awareness

This post is the second installment of the Teyuna mamos and zagas, spiritual leaders of the Arhuaco, Kankuamo, Kogi and Wiwi people of the Sierra Nevada de Santa Marta region of Colombia. They were known as the Guardians of the World, and were featured in several documentaries, including Aluna.

A second speaker thanked us for taking time to listen to him and his group. He stated that as people we circle around “me”or our ego as the ruler of our actions, he says that it is hard to get out of this mindset. But they are living, thinking, and feeling in a different way, a different way of being.

While the first dialogue was about respect for each other, he wanted to share with us the law of creation. He noted that between the city and mountains straddles a border of forest that offers a sanctuary for birds living in their own environment. Following the law of creation, the birds also have their own order, language, and way of life.

The speaker concluded by emphasizing that the tour has been about respect for all things and the balance of life. Not long ago this message was suppressed by modern people and their belief system, but now it has been respectfully received. Now is an important time to respond to this message. 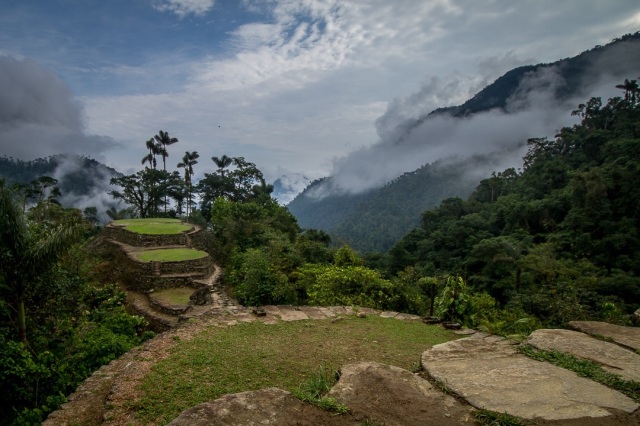 The third speaker wanted to share ancestral wisdom with the audience. He said that North America is very beautiful and he is happy to see everyone and to share the space with us. But the real reason why they came to North America is because their wise elders have told them about many problems today. For many years they have been told about these problems by their elders.  The reason for the problems is that if we don’t respect the rocks and water, thus they won’t respect us.  If we don’t live in harmony with the Earth, then it results in illness and an imbalance.

The speaker saaid “we now realize what the ancestors were saying a long time ago. Now we are suffering the consequences.” The speaker found that his way of understanding the Earth was very different from Westerners. “You see,” he stated, “the Earth as a separate object and not connected to your feelings.” They see the Earth as sacredly connected to humans and not separate. Even though there are fundamental differences in the two worldviews, they want to engage with us despite these different ways of thinking. They want us to be aware and be activators of a more relationship consciousness. They offer an invitation to us, to embody a mindset or attitude of respect for the Earth.

Will post the final installment of the blog on Thursday, October 11, 2018.

Dr. Denise R. Ames is a long-time educator, grade 7-university, author of seven books, and president of an educational non-profit, Center for Global Awareness, based in Albuquerque, New Mexico. CGA develops books and materials with a holistic, global focus for their three programs: Global Awareness for Educators, books and resources for educators and students grade 9-university; Gather, Global Awareness Through Engaged Reflection, a self-organizing study and conversation program for adults focusing on seeing different perspectives of pressing global issues; and their most recent program Turn, Transformative Understanding and Reflection Network, which encourages lifelong and transformative learning to help us arrive at a place of personal and global well-being using a seven “path” approach.

This entry was posted in Uncategorized. Bookmark the permalink.